The Rockstar Editor is a feature in Grand Theft Auto V. It is only available in the PlayStation 4, PC, and Xbox One versions of the game.

The Rockstar Editor is a successor to the Replay feature seen previously in Grand Theft Auto IV's PC version. The Rockstar Editor was available from launch on the PC version of the game, and was later added to the Xbox One and PlayStation 4 on 15 September 2015, as part of the Freemode Events Update.

The Rockstar Editor gives the player the ability to create, edit, and share videos of Grand Theft Auto V and Grand Theft Auto Online. There are various editing tools at the player's disposal, including camera filters, custom camera placement, and music to complement the recording.

The player can use the various available recording tools to create their own videos, which can be uploaded to YouTube and the Rockstar Games Social Club.

Gameplay in first-person perspective cannot have camera edits made in the editor, and certain Story Mode missions and Random Events will not allow recording at all.

Unlike previous iterations of the replay recording where backdated clips are captured, the player can begin to record gameplay on demand at any time by pressing F1 (PC), holding

(Xbox One), or holding

(PlayStation 4). Once activated, a HUD element positioned above the radar will indicate the elapsed recording. The length of recording can vary depending on what is going on in the gameplay. For example, a busy scenario, such as a shoot-out in a mission, or a large chase scene in traffic, will cause the elapsed time on the clip to decrease - as such, as the clip will be shorter. Clips in the middle of the desert, or very empty spaces, for example, are much longer, and can last up to 3 minutes. Once a clip has finished recording, another one will immediately begin recording, however, there is a short wait of around half a second before the next clip begins recording, which the player must be wary of in case of action-packed events, that could occur in this period of time. The player can stop recording at any time by re-pressing the record key/buttons.

An Action Replay system is also available which replicates the previous game implementations, and can be enabled by pressing F2 on PC, holding

While Action Replay is enabled, pressing the record key/button combo (e.g. F1) will then save the last moments of gameplay.

Action replay is disabled by pressing F3 on PC or

The Rockstar Editor can be accessed in the pause menu - it is the end tab along the menu navigation. From here, the player is presented with a list of options:

Within the project menu, the player has a huge array of options to work on their project:

Before the player can begin, the player will need to select the first option; Add Clip. When selected, all recorded clips will be listed, in order of time recorded. These clips will be named in day and numerical order. Once a clip has been selected, it will be added to the project timeline. Here, the player is able to move around the timeline, positioning different clips as they add them. Here, they can also return and add the other options available, such as radio tracks. Clips are represented in a blue color, and are found at the top of the timeline, while radio tracks are represented in purple and score tracks are represented in orange.

While hovering over a clip, the player has the option to duplicate, delete, or edit the clip. Editing the clip at this point will bring the player into the clip editor, which is where a large portion of editing will take place.

In the clip editor, a menu box at the left-top side of the screen lists the available options to edit a clip:

Note that these effects apply to markers added on the clip editor timeline; markers are positions along the clip where the player can edit the aforementioned settings, allowing a diverse range of camera angles, sound-effects, overlay effects and playback speeds along the entire clip.

The player can also add Anchors; anchors are special forms of markers that indicate a point in a clip where other aspects found in the project editor (namely the text, music, ambient, and score tracks) can be positioned to.

Included in the editor pack is a Director Mode which allows the player to play as any one of 277 character models in a Free Mode map that can have many settings customized. These character models vary in their capabilities, with some being unable to enter vehicles or use weapons.

For the Xbox One and PS4 release of the feature, new features were introduced, the listed features were also added to the PC version.

Features added in the Halloween Surprise 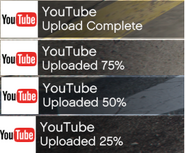 The "YouTube Upload" progress notifications appearing at the 4 different stages of completion.